Starting today, I’ll be devoting Wednesdays to the writing process in an ongoing series – How Writers Write. I’m endlessly fascinated by the ways writers move from this world into the ones in their novels. Hope you enjoy this peek into my very busy and off-beat inner world.

I’ve spent a fair amount of time with other historical fiction writers and we can all pretty much agree that one of the most challenging aspects of recreating the past is that – depending on the era – there isn’t always much to go on in terms of visual reference.

Broken pottery and mouldy remnants of tunics are astounding, but less-than-representative of everyday lives – especially for the period in which I write.

That said, imagery plays a key role in relaying emotions, temperament, tone – even colour palate of a time period. It’s crucial!  With that in mind, I have turned to relatively modern-era Pre-Raphaelite art for inspiration. 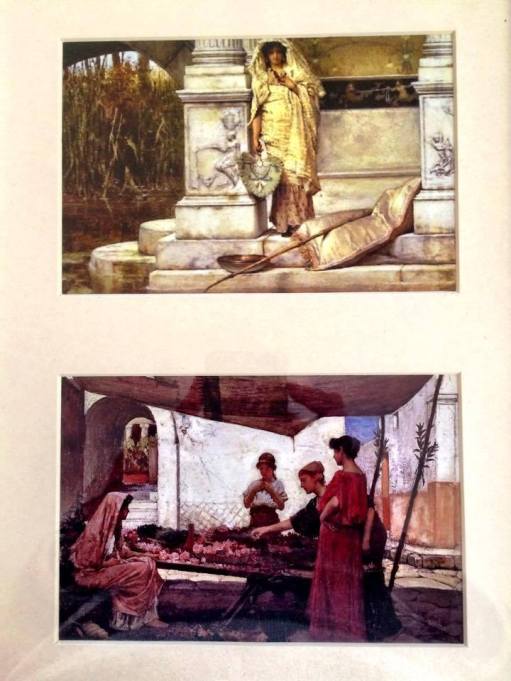 My romance with mid-19th century British art rebels is about 45 years young. I swear that somewhere in my first year of life someone must have stuck a John William Waterhouse painting in front of me and that was it. Boom. Deal with the devil made.

After all this time, Waterhouse and his cohorts – whether true Pre-Raphaelites or not – have proven to be a bottomless source of scene reference for me when it comes to setting tone and building detail into key scenes within the novel.

My go-tos are Waterhouse, Sir Lawrence Alma-Tadema, Edward Robert Hughes and Arthur Hacker (who is a classicist, not a PRB). They capture vignettes of women and life in the ancient world that draw passion from the most mundane of hearts.

I have printed out many 4×6 copies of these beautiful paintings, keeping a stack of them on my bedside table to thumb through and imagine the stories behind when looking for inspiration.

The top painting – Roman Fisher Girl from Sir Lawrence Alma-Tadema inspired details in a critical scene as part of Chapter 11.

The second – A Flower Stall from Waterhouse, inspired a scene in Chapter 9.

Below is the next set I’m working with in later chapters.

Even if this sort of art isn’t your thing, Google image searches are a great place to discover reference for scene development. Start by typing in ideas and see what comes up. You may be amazed.

I keep these and all of my research in extensive Pinterest files (check out my Pinterest HERE).