A Canadian In France, The Woman On The Wall, Travel

Atop The World With Da Vinci

“I’ve been walking for like an hour and I’m exhausted. I’m going to sit on this bench over here for about two days,” I told my ephemeral guide.

“Perfect. Right over there. Nope, one more bench over. There, you got it.”

There, at a tiny grove of trees just above the marked remains of where the Château Royal d’Amboise used to extend into a far greater complex than what remains today, I could see what she offered up.

A new whispering in my ears began to shift from mere chatter to a conversation overheard and a vision of an old man alongside two others stationed at wooden easels. Amongst the shady plane trees and Gary oak, he guided their hands to sketch and capture the scene in front of them.

I stepped forward to take a closer look, and a young woman stretched her neck around the closest easel to make sure I saw her.

The old man waived a gentle finger at her and everyone returned to their work. Something pricking me on the shoulder forced me out of the vision and around staring back at the river.

I caught a glimpse of the landscape they had been painting in the background.

By the time I turned back around, the group of painters had vanished from view, but not from my own knowing of who I’d had the chance to watch at work that day—Melzi, Salaí, and their Master.  Who was their muse? What else had they learned to paint on that hill in the magical light of Amboise?

Just beyond it on the trail, it would seem others may have a bit of a sense as I dd that something truly remarkable took place there.

My guide pointed out that it is marked in plain sight, for those of us who know to use as a guide.

I nodded and acknowledged her gift, then suddenly stood.

My attention redirected itself by force, and I moved toward what appeared to be the remains of a moat or battlement at the top of the castle where I was offered another vision.

This time men and women fled a burning castle, but it was too late. The bodies piled up, filling the space, the screams and panic swarming my senses until my mind snapped back and I stood in the sunshine shaking. 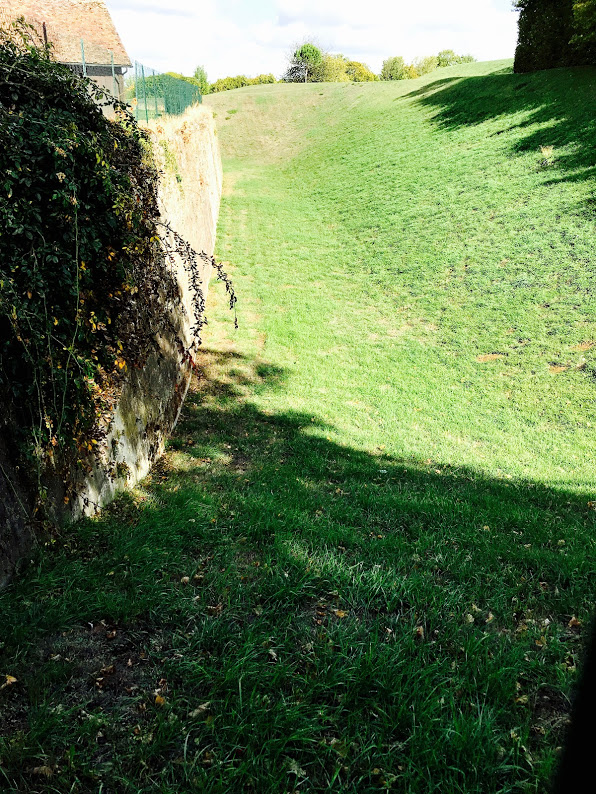 It would take a week for me to understand the final message of that time at the top of the world with da Vinci.

My guide spoke in a solemn tone, offering up an explanation of what I’d seen.

“Not even his power could stop what came for us.”