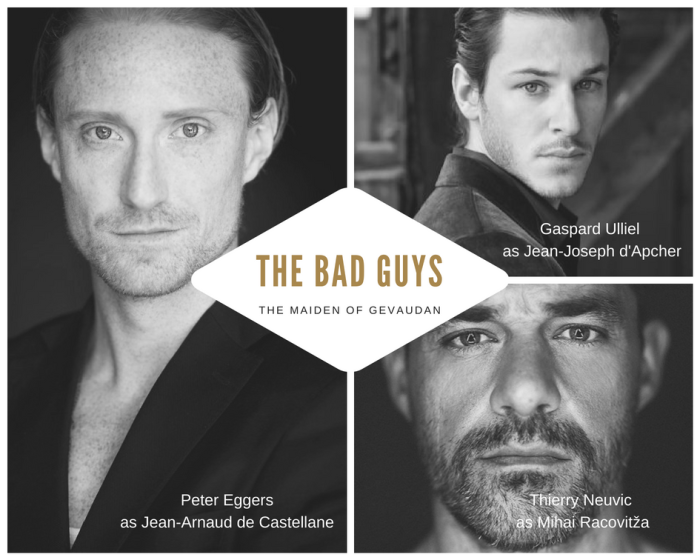 One of my favorite pieces of plotting out a novel is the process of “casting” all of the parts. A dear friend of mine, BC film writer and YVR Screen Scene maven Sabrina Furminger and I once even cast an entire novel full of Canadian actors. Some may call it procrastination, we called it character study!

I’m a visual writer, using maps, story boards and an unholy amount of photo reference for building out my worlds. So, it’s no surprise that I prefer to spend the year or so I invest in writing a book with a clear picture of what my characters look like.

The Maiden of Gevaudan is no exception. It’s men are brooding and broken, flawed yet furiously determined to prove themselves. There are six in the primary cast whom I have fallen madly for over the course of writing the novel. Even the nefarious Bishop Jean-Arnaud de Castellane and the beautiful yet languid Marquis d’Apcher have won me over.

When it comes to finding the right look for a new character I don’t usually go for the current A list actors, preferring those who have unique, defining characteristics that make them worth investing in. Twelve months later and I am still blushing a bit every time the duplicitous Bishop de Castellane enters a scene and my mind races to actor Peter Eggers.

As for the men whose hearts rule amidst the bloody chaos of the Gevaudan, I’m entirely smitten with Berlin-based actor Karim Cherif whose level of brood matches Michel Antoine’s with an eerie perfection. Could he have been an 18th century gamekeeper who preferred wolves to warmongering? It only needs to work for me. 😉

Of course there is always Croatian actor Stipe Erceg, who I imagine to be hanging out right this very minute at a posh club sipping Lagavulin with fellow Berliner Karim Cherif, which is ideal since their characters have long walked the forests of the Gevaudan together, clearing out the dead and caring for what remained of the living.

Finally, I could not have spent the last year writing anything at all if I hadn’t known the face of Count Sergei Saltykov, the broken Russian soldier who lost his daughter and his soul in the Gevaudan. Big props to Ukranian actor/dancer Sergei Polunin for executing on that task with true grace and ease even if he didn’t realize he’d been pressed into service.

So, there you have them, the men who helped shape The Maiden of Gevaudan. Next up, the women (of course). I”m saving the creatures for last. 🙂